It's been a little while since I sent a blog note, so 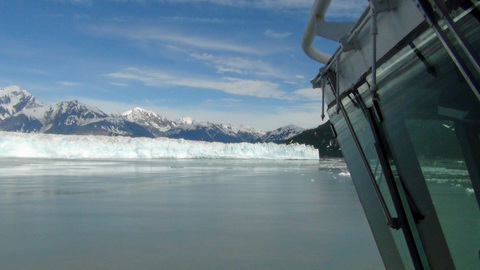 just wanted to touch bases.  We're in Juneau today and it's rainy; consequently, I'm catching up on some details.

Earlier this week, we had the BEST day at Hubbard Glacier that we've had all summer.  In fact, I would say that it's one of the three or four finest days I've EVER had there in 12 years!  We got the closest to the face of Hubbard that Coral Princess has ever done in twelve years up here, and that was still about 2.5 miles!  We were close enough to actually view the aperture on the right side created by the 2002 outburst between Disenchantment Bay and Russell Fjord.  (The pix above was taken from the bridge as we approached that aperture). Just after I pointed out a spot that "might" calving, the ice came tumbling down in that very spot two or three times in a row.  It was great!!!

On the beach to the left of the glacier as we were entering, we also saw two moose walking along.  I've NEVER seen them there and still can't figure out how they got there!

I've just now posted a few more pix on the Alaska 2012 Pix album.  After the season, I'll be posting many more, but enjoy these few.

I really love hearing from you and one by one, I'll be adding the pictures you send to of us together to this site.