An Alaskan Adventure to see the Eagles, Nov. 2011

After years of considering and wishing to see the eagle "congress" on the Chilkat River near Haines, I decided that this was the year.  There is an unbelievable phenomena that occurs in a two mile stretch of the river around the first two weeks of November.  In this meandering, silt laden Alaskan river fed by glaciers, there is an underwater natural hot springs.  Because of this, the river seldom freezes for about two miles. Consequently, this small section of the river is the last place that the salmon come to spawn.  And, all these salmon cause the eagles to come in abundance:  About 4,000 of them yearly! 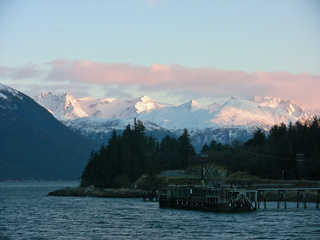 On Sunday October 30 I flew from Medford to Seattle and then on to Juneau.  I arrived in Juneau in a driving rain and a fierce wind.  Not a good start, I thought.  After checking into my motel and getting a bite to eat, I got hit the hay.  Early the next morning, the motel shuttle drove me out to the ferry dock at Tee Harbor.  Long before sunrise, I boarded the Malispina, one of the Alaska state ferries, and headed for Haines. Even though the weather had been horrible the night before, the new day of Oct. 31 dawned bright and beautiful.

After a nearly four hour ferry ride, we arrived in Haines.  It was breathtakingly gorgeous.  I had made reservations at the Captain's Choice Motel (listed as the best in this little town of 1,500).  Their shuttle picked me up and drove me the 10 miles into town.  I inquired about renting a car.  They were willing to do so for $100.00 and only until 9:00 AM the next day.  I didn't want to waste the good day, but felt I could do better, and I did!  In my room, I made a couple calls and got a car for a full 24 hours for only $69.00.  The lady picked me up and I headed directly toward Haines Junction on the Alaska Highway.  About 15 miles down the road I began to see the eagles.  Just a few at first, but the more I looked, the more I saw.  They have great viewing areas, and I was pretty much alone.  At one stop I met a lady from San Diego who was on the same adventure as I; as it turned out her sister from New Hampshire was with her.  She mentioned that they were staying the other direction from town in a bed and breakfast.

At the second stop while I was organizing things, I dropped my expensive zoom lens.  Unfortunately, the focus broke and that really limited my picture taking.  I knew that the weather could change in minutes so I tried my best with video and the lens I had left to maximize the amazing weather.  After stopping several times to take photos, I drove on about three miles and went through the Tglinket village of Klawak.

It has been a long couple days so as the sun started to set, 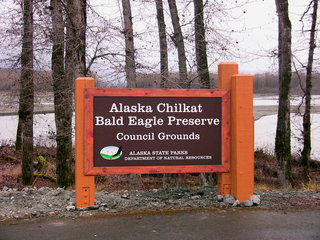 I made my way back to town to eat.  Choices were limited, and I didn't make a good one!  After a rather greasy meal, I collapsed in my room prepared to get up early and set out again.  A horrible storm began than night and continued all day and the next night.  Nevertheless, I once again got up before light and headed up the Chilkoot River (a different direction) hoping to see some bears.  It was POURING!  I seemed to be all alone, but it was still very enjoyable.  On a lonely road and miles from where I had met them yesterday, I met the same two sisters.  They couldn't say enough good about their bed and breakfast; in fact, they had seen several brown bears the night before.  They invited me to drop by and have a cup of tea, and while I was there I decided to check out of the Captain's Choice and move out to this motel for my second night.

After this encounter, I headed back up the Chilkat River and saw HUNDREDS of eagles.  It is good moose country, but I didn't spot a one.  At noon I had to take the car back.  I had connected with a childhood friend who lives there.  She met me at the "car rental" spot, which was the lobby of another motel, and I took her to lunch.  It was a neat experience to share memories of over 50 years ago.  She agreed to take me back to my new motel on the river; on the way I went by the only grocery in town and purchased a TV dinner. ANYTHING would be better (and less expensive) than the night before.  I guess the storm scared off the bears because they didn't appear.  The wind was so fierce that the eagles could hardly fly.

Again the next morning before light, I went with my two new friends back up the Chilkat River and took even more pictures.  The weather had cleared off again, and it was another gorgeous day.  For about 15 miles we drove in a snowstorm, and then it cleared up.  At one spot we met another couple who had been at the B & B.  He is a professional photographer, and I really enjoyed talking to him.  We had agreed to try to drive to Mile 33.  That's all it is; just a milepost on the highway, but there is a log cabin restaurant there.  We made it and had a great breakfast. The photographer and his wife showed up, and we discovered that they are from Medford, OR also.  It is truly a SMALL world.  Even though it was gorgeous; it was cold! My two new friends took me back to the B & B.  The owner was out of town, but he told me to just drive his car to the ferry and leave it there with the keys in it.  That's Alaska for you. And, that's what I did!  The Malispina is a large ferry, but for the return trip to Juneau, I road the LeConte--a much smaller ferry.  It was loaded with the Haines girls' volley ball team going to a tournament.  That's Alaska, also.We had a picture perfect departure with the sun setting over the snowclad mountains, creating a pinkish hue in the air.  Because it was clear, I was hopeful for Northern Lights, but no such luck. It was dark and cold when we arrived in Juneau, but clear.  My motel picked me up, and finally around 11:00 PM, I made it to bed.

My flight to Seattle wasn't until noon so I arranged to meet a couple friends for breakfast.  It was about 18 degrees, but so beautiful that I just couldn't stay in my room.  While I waited for them to pick me up, I took a walk with my camera.  It was so cold that tears were running down my face, but I loved it.  After breakfast I asked Pam if she would drive me out to Mendenhall Glacier to get some winter pictures.  Such a day is extremely rare in Juneau, and I was really blessed that day.

Eventually, it was time for my flight to Seattle and an 8 hour layover.  It was midnight before I made it home.  Because of the broken camera, it wasn't  perfect trip.  I didn't see a bear or a moose, but it was still one of the most exhilarating Alaskan experiences I've ever had.  I hope to return again with David.  He would love it.

I've posted pictures in the Haines and Juneau folders.  You will love them!

Glad you liked it.  You would have LOVED the trip.  Quite an adventure.  I'm looking forward to seeing you in March.  My mother is not doing well!  We leave on Friday for 20 days cross-Atlantic from Rome to Ft. Lauderdale.  We're having Thanksgiving with Doug and Shirley Schmidt.